When Kassia first opened this April, I was intrigued by their offer of Indian tapas as, when tapas comes to mind, I only think of the Spanish variety. They reminded me of a similar restaurant, Koh, on Kings Road, a Thai tapas restaurant. Both have tempted me with their unique cuisines but it was Kassia’s lunch deal that drove me inside.

Everyday, 12pm – 3pm, they offer 3 lunch options for £15 so I arrived on a Thursday at 2.40pm to quickly grab the offer. As I entered, it was empty inside with only one server at the bar. He didn’t say anything as I appeared so I sat at one of the tables and read the menu.

It was very spacious inside and the chairs were soft and cushioned with a pink or blue crushed velvet exterior. On the walls were some abstract portrait paintings and the bar was large and pristine, boasting plenty of spirits and bottles. The decor wasn’t Indian themed as the food suggested but it was airy and comfortable. 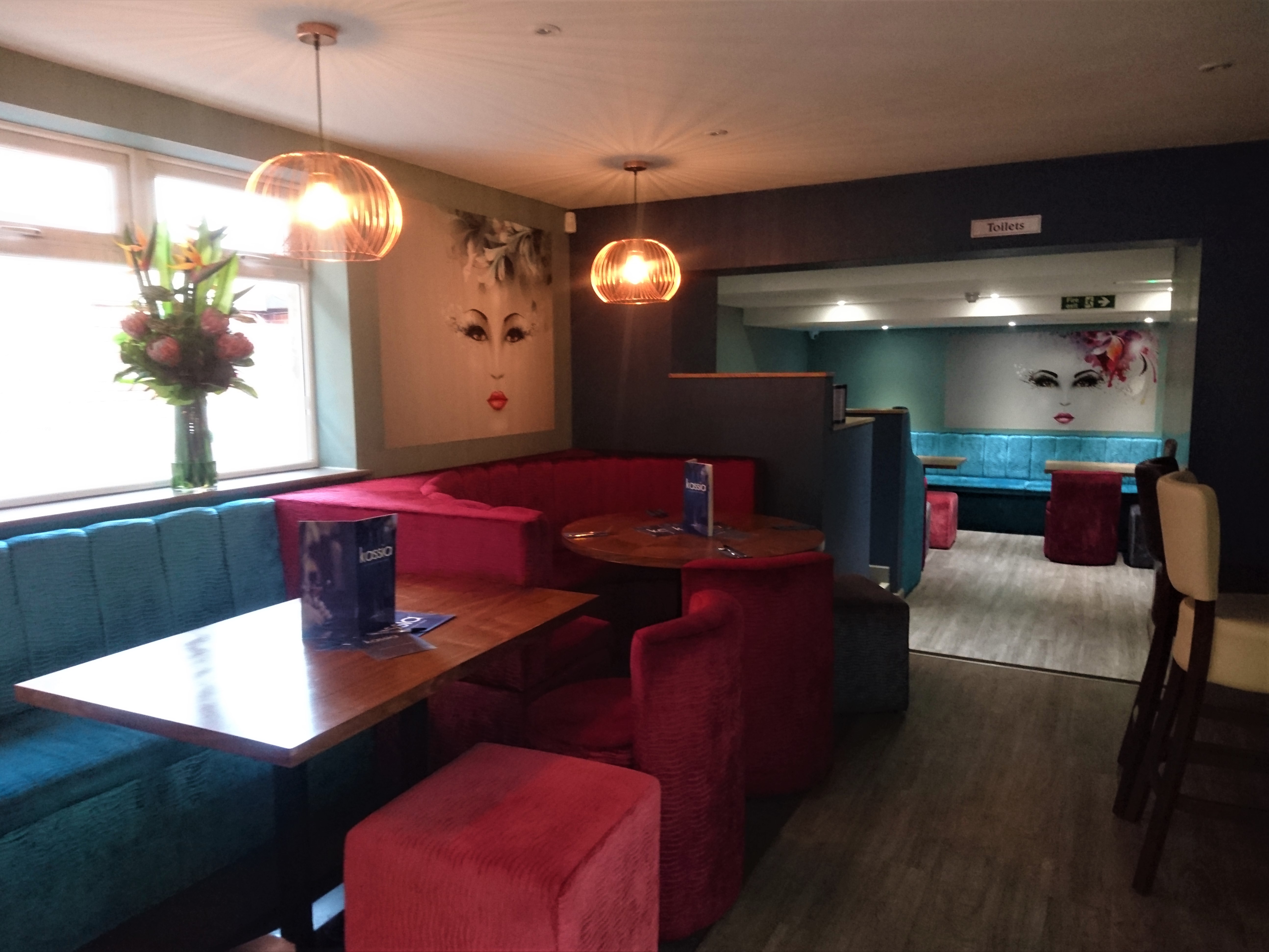 As I looked over the lunch menu, the server said nothing to me but lingered silently in the background. Around ten minutes later, as I stood up to order, he bluntly said, ‘sorry the kitchen is closed now.’ I awkwardly smiled, put down the menu and left, telling him I would come back in the evening.

This quite annoyed me. The server, as I entered, should have warned me that the kitchen would close at 3pm. I assumed it would be open all day and I would be able to quickly nab the deal. On the website, it says ‘open for lunch from 12pm’ but it’s only when you go onto another page and peer at the tiny text that it tells you the exact food service hours. What was even more frustrating was that the server waited for me to look over the menu and decide what I want before telling me the grave news. It was as if they really were out to disappoint me.

I returned around 6pm and once again it was dead inside minus a few servers. The staff once again kept silent in the background, not even welcoming me, as I took a seat at a booth and inspected the drinks and food menus.

Their drinks options were very extensive with a good range of spirits, cocktails and some unique offers. There were not just mixers but also the option to buy a paddle board of shots with flavours including crispy bacon. The range of cocktails included traditional Martinis and Daiquiris as well as Indian styled ones such as a Rangpurinhia – Tanqueray Rangpur, cardamom syrup and pineapple juice. These were all average in price around £5.95 each. There was also a £395 bottle of champagne, The Ace of Spades – apparently, the cheapest price in the city.

They also sold spirits by the bottle with 2 pitchers of any mixer. These included Crystal Head and Sailor Jerry. At first, listed at over £100, these can seem quite shocking. But, once you do the math, you save around £30. This is perfect for parties and groups or any individual who doesn’t wish to wake up in the morning.

About five minutes later, the server came over and started to talk to me about their meals, what is the best things to have and how the establishment works.

‘You write your order on here,’ he pointed to a sheet on the table, ‘and if you have not been here before I suggest you get the tapas. It’s 5 for £23.95 which is perfect for two people. Or there is the Tiffin which is 3 curry dishes and a rice chosen by our chefs for £16.’

He then went on to tell me that in the evening Kassia becomes more of a club. Food is stopped at 9 and a Dj comes in. I realised that it was a great place for large groups. The tables were clumped together to seat 4+ and the order sheet made it easy to jot down countless meals. The tapas and Tiffin are good to share and then, when everyone is done, you can share a bottle of vodka or a paddle of shots. It would be heaving at Christmas for work parties.

The food was all authentic and around average in price for curries, naans and rices. The Tiffin was good value but the tapas, at £5 – £6 each, were slightly above average. There were good vegetarian options such as the Alloo Chilli Chana –  chickpeas with fresh green chillies, onion, garlic and potato. The meat options were mainly either lamb or chicken with different spice and vegetable variants. I wrote down my order on the sheet, gave it to the waiter and then asked for a strawberry daiquiri.

This was done well with the right level of sweetness that wasn’t overpowered by the rum. It was chilled and almost creamy. My food arrived shortly after, on a large heated tray, but as it did, so did a horrible nuisance.

A couple entered and sat down on the table next to me. I didn’t pay them much notice at first but they soon made it very difficult for me to ignore them. The woman started talking obnoxiously loud, swearing repeatedly at her partner about something on his phone. I didn’t pay too much attention but she said f$&k with every breath and made no effort to be polite or quiet. The staff looked at each other awkwardly, unaware what to do. It wasn’t Kassia’s fault but what had started as a pleasant visit had become an earsore. 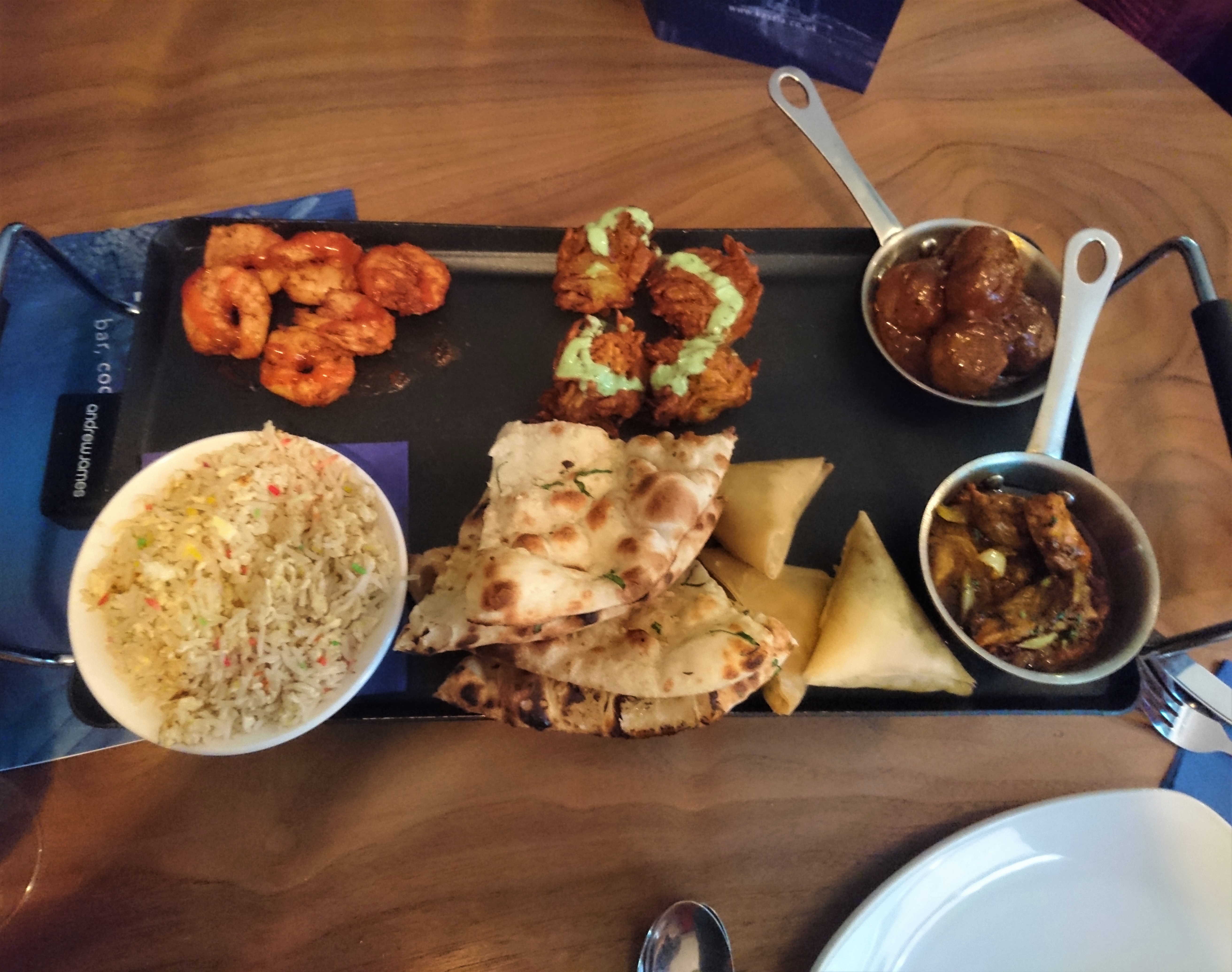 Back to the food. This large tray had each tapas neatly laid out on it with the naan bread and rice I had ordered on the side. First I tried the Holoi Chingri which were 5 tiger prawns in a sweet chilli sauce. These had a bit of a kick but were very tasty and moreish, thick and succulent. Next was the Tamarin Chicken Chaat which was strips of chicken cooked with ginger, garlic, onion and tamarind. Also spicy, I enjoyed this too and devoured the meat and soft onions quickly. The Onion Bhajees were small balls and normally I pass on these as they upset my stomach. But, this time, they were flavoursome with a creamy mint sauce on top. They were not too greasy and were surprisingly light. Another tapas which didn’t last long was the Kofta Kebab which actually arrived as thick, springy balls. They were lathered in a sweet brown sauce and tasted beautiful. The lamb meat fell apart in my mouth. The Shingara were okay. They were small pastry parcels with lamb and vegetables inside but I didn’t finish these as they were slightly greasy. The egg fried rice was tasty and gooey but I had to send the garlic naan back as it was over cooked. The waitress kindly got me another which was far better – soft, warm and tangy.

After the food was cleared I was stuffed. Although the portions were small they were flavoursome and filling. I waited for some time for a dessert menu or the bill but the servers didn’t come over. There was nothing on the menu to indicate sweets so I stood, paid my bill and left.

Kassia, despite the service and people next to me, was lovely. It is something different and tasty and seems to be a great place to spend the evening. I want to go back and experience it in a group where we all chat over curries and tapas and order shots in the evening. The vibe is nice and the price is worth the quality. However, I would like to see some authentic Indian desserts, such as a Kesari bhath or Kulfi, and more attenuative staff.

If you are wanting to chill out, experiment and add some spice to your life then try Kassia. You might even see me there…